The Life Cycle of a Disposable Plastic Bottle 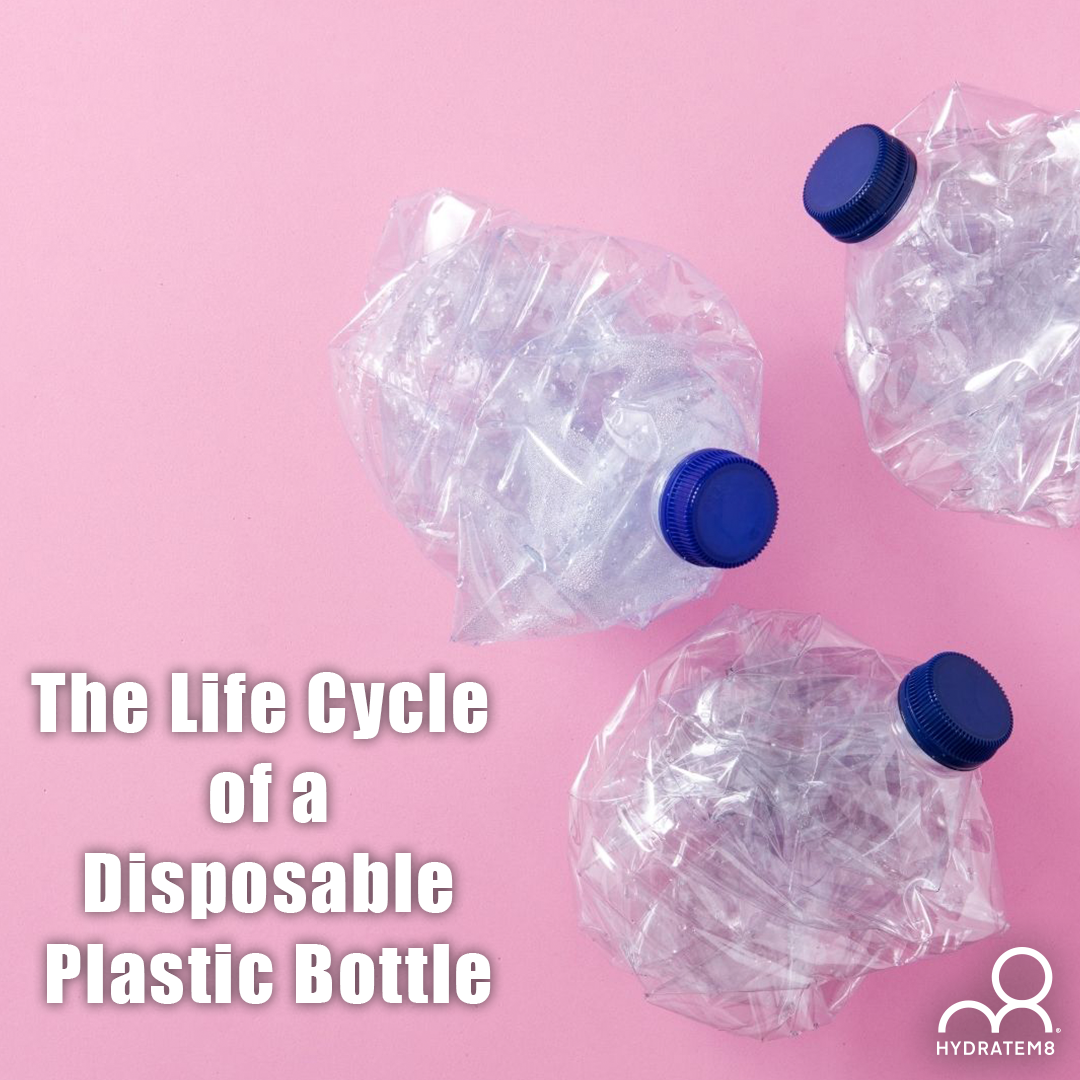 Ever wondered just what goes into making a disposable plastic bottle? It takes 2000 times more energy to make a typical one-litre bottle, lid and associated packaging than it does to get water from a tap. Staggering, right? Especially when most of us just throw these bottles away when we’ve finished with them.

Let’s take a look at the life cycle of a plastic bottle and what it takes to get it to the supermarket shelf.

Disposable plastic bottles, like those used to bottle water, are made from a plastic resin called polyethylene terephthalate (PET). Many products are made from PET, but its use in drinks bottles is based on its safety, versatility, weight, transparency and the fact it can be recycled.

The lid and outer packaging are often made from a thermoplastic polymer which is hard and chemically resistant, known as polypropylene.

The basic building blocks of PET are ethylene glycol and terephthalic acid, which form together to make a polymer chain. Spaghetti like strands of PET are then cooled and cut into tiny pellets.

Now the plastic is ready, the bottle can be made. The pellets are heated and put into a mould, taking the shape of a long, thin tube – known as stretch blow moulding. The bottle shape is produced when a steel rod is slid into the tube, blowing high pressurised air to expand it. The expansion allows the plastic to take the shape of the bottle mould. To ensure the bottle has a flat surface, a new piece of plastic is added to the bottom of the bottle.

The formed bottle then goes through a series of tests to check its:

Once they are made, the bottles are packed and shipped, where they can then be sold. We may not usually take into consideration the energy and effort put into the transportation of the bottles. For example, they can be transported by lorry, aeroplane, ship or train which adds to the carbon footprint of each individual bottle.

The sad thing about disposable plastic bottles is they are typically used once and then thrown away. 2.5 million tonnes of carbon dioxide are produced by bottled water production every year.

The use of the bottle doesn’t harm the environment but the manufacture and disposal do, which is alarm considering how short the life of the bottle is.

Positively, PET plastic water bottles are 100% recyclable. Once used, if recycled, they can be melted down to make more plastic bottles. However, despite the fact they are recyclable, it is probably likely more are placed into landfill than recycled.

The average person in the UK throws away 14 plastic bottles each year. The cost of this is approximately the same as purchasing one of our tracker bottles, which will not only last you longer but is also better for the environment. So, do your bit, ditch the disposable and buy a reusable tracker bottle today!

"Since starting slimming world I wanted to increase my water take. That’s when I can across Hydratem8 water bottles. The design was great, the quotes where lovely. I ordered right away!"

"AI have been using my HydrateM8 bottle at work for the past few years and I rely on it so much I decided to purchase another for use at home. Being someone who likes to exercise regularly means that I need to drink lots of water throughout the day and it is so easy to forget."

"I am a busy mum of two children but I will always be a mum of four as I lost two baby boys within this last year called Tommy and Riley. I buy trackers as they remind me to drink and I’ve used them while I’ve been in and out of hospital as one thing I’ve struggled to do this…
View all stories

"Since starting slimming world I wanted to increase my water take. That’s when I can across Hydratem8 water bottles. The design was great, the quotes where lovely. I ordered right away!"
View all stories