Something that has always been close to our hearts is to help those in some of the World’s poorest and hardest to reach communities.

Between 2015 and 2017, we worked with PumpAid, a British charity, to help improve two of life’s basic needs for those that need it the most – safe water and sanitation. Thanks to our wonderful customers we were able to sponsor a massive 13 water pumps in Africa during our work with Pumpaid!

The following is a report into a water pump we sponsored in Kazebe, Mchinji:

“The initial phase of the project has involved Pump Aid and stakeholders identifying the community most in need, along with coordinating the most suitable site for the Elephant Pump. In order to do this, Pump Aid works with the local district authorities and communities to target villages that currently have little or no access to clean water. In Kazembe, people were using an unprotected open well and nearby stream for drinking water, and due to a lack of toilets community members were practicing open defecation. In each community, children had been suffering from waterborne illnesses such as diarrhoea. Due to frequent illnesses school attendance was low and parents were struggling to earn a living while caring for their sick children. Long journeys to collect water that is unclean also resulted in loss of earnings for parents and time spent in school for children.

It is important to engage with a variety of different stakeholders to make them aware of the work to be carried out so that they can commit to support the project even when the funding phase is over. Mobilisation meetings have been carried out involving the District Executive Committee (DEC), District Coordinating Team (DCT) and Area Development Committee (ADC). The Local Government/District Authorities are pivotal in introducing Pump Aid and the respective community. For the activity to be successful there was need to brief collaborating partners at district level. This necessitated a series of briefing / consultative meetings with various stakeholders to make sure that they are aware of the project and its activities.

Sensitisation meetings were held in the village in order to promote ownership and sustainability of the facilities. During these engagement or mobilisation meetings, the village’s contribution during the implementation of the project was agreed. First the community was asked to form a water point committee to represent them in the decision making during the implementation of the project and the management of the pump going forward. The committee’s first task was acquiring locally available materials (bricks and sand) for pump construction.

The community was also encouraged to start raising MK5,000 (roughly £7) prior to well preparation to be used for operation and maintenance of the elephant pump once it has been installed. The water point committee was encouraged to buy shares from the Village Savings and Loan Scheme so that they can maximise the profits. Community contributions help to instill a spirit of ownership and responsibility towards the facilities by the community thereby promoting sustainability.” 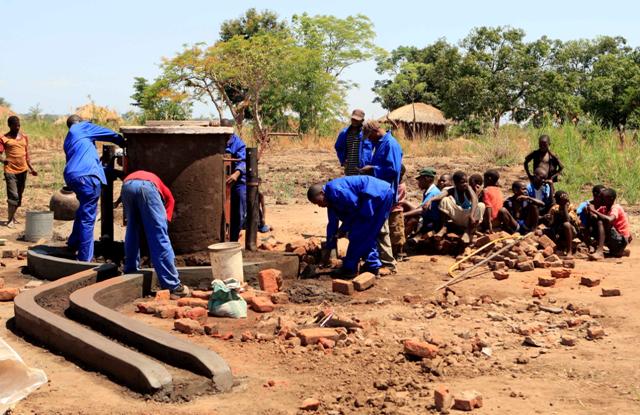 Pump Aid staff in the village of Paulo, near Salima, Malawi, build an Elephant water pump, in front of some of the village’s children. See Matthew Parris story. Picture by Peter Nicholls-The Times-26/11/08 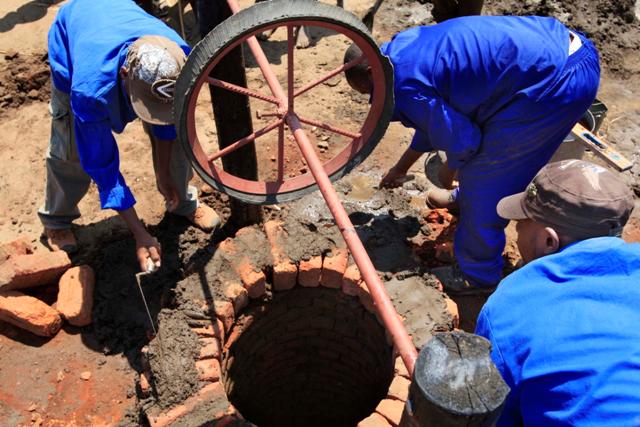 “The head person in each committee varies but we do encourage women to take on lead roles as water, sanitation and hygiene issues tend to affect their daily lives more. Any information to the villagers (in relation to water, sanitation and hygiene) now passes through this committee. Pump Aid keeps in touch with them by carrying out follow up visits and through mobile telephone contact to make sure they are comfortable in their role.

The role of the water point committee is to maintain the water point by providing technical support and often collecting funds from the community to buy spare parts where required.
The water point committee is mandated by a plan of action which was developed during the initial meeting. With this plan of action, the task force makes follow-up visits on individual households and ensures that each household follows the agreed action points. In cases where the household is not complying with the agreement, people are summoned to the village head to discuss any issues that need to be worked around. In the case of the vulnerable and those not capable of constructing a latrine the task force, with the help of the entire community ensures that all are assisted by helping them build a latrine or by grouping together funds to buy them one so they can stop Open Defecation.

In addition to setting up the Water Point Committee, Pump Aid has held additional meetings in the community to agree the site where the pump would be of greatest benefit. These initial community meetings also provided Pump Aid with the opportunity to engage with community-based builders who have been involved in the well sinking and lining of the shaft where the Elephant Pump will be built.

Work has also begun on the hygiene and sanitation behaviour change. In ensuring that communities attain good health an approach known as Community Led Total Sanitation (CLTS) was used as one way of encouraging people to improve their sanitation. The process has made the village realise the importance of latrines and they have formed task forces to ensure that every household has a latrine. Pump Aid has worked with the community to see which sanitation technologies offer the most sustainable options and the community have followed up on this by starting to build or purchase their own latrines.

The initial triggering sessions that have been carried out in the CLTS process involve very practical ways to demonstrate the links between hygiene and health including some ‘shock’ sessions such as mapping out where faeces can be found in the village. These sessions awaken communities to the harmful effects open defecation has on them, their children and neighbours. The aim is to make certain practices unacceptable. We use a combination of community facilitation and empowerment methodologies to inspire and empower communities to stop open defecation and to make improvements in hygiene and sanitation behaviours. Each triggering session within the community finishes with the selection of leaders from the community who will act as advocates and lead the change process.” 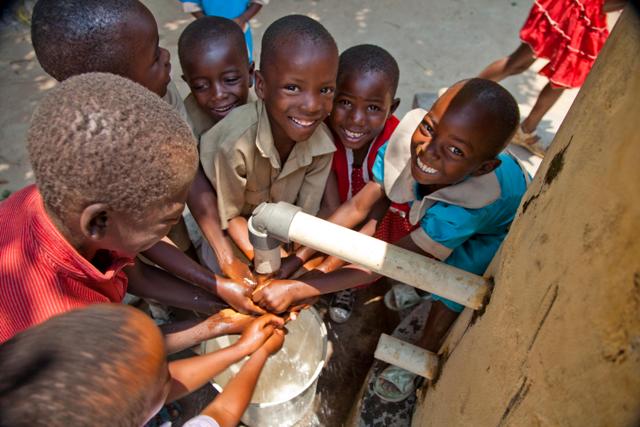 A lady fills, happily, water pales and carriers with clean water from the Pump Aid Elephant water pump in the village of Chikaunga. It is believed to be the busiest water pump in Malawi, where the charity Pump Aid are installing more of their pumps. See Rosemary Bennett story. Picture by Peter Nicholls-The Times-27/11/08 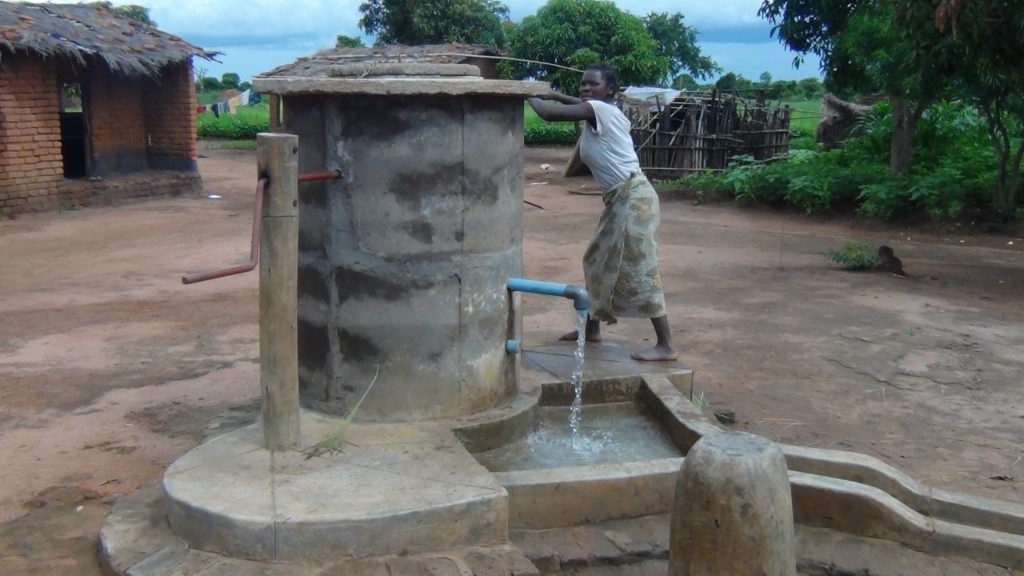 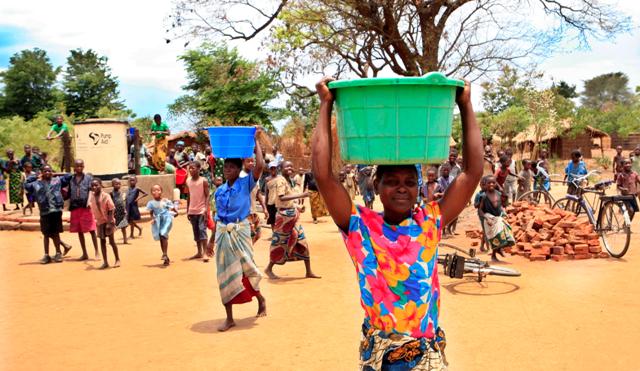 Women walk away with containers of water from the Pump Aid Elephant water pump in the village of Chikaunga. It is believed to be the busiest water pump in Malawi, where the charity Pump Aid are installing more of their pumps. See Rosemary Bennett story. Picture by Peter Nicholls-The Times-27/11/08